When the Bough Breaks: A documentary about postpartum depression. 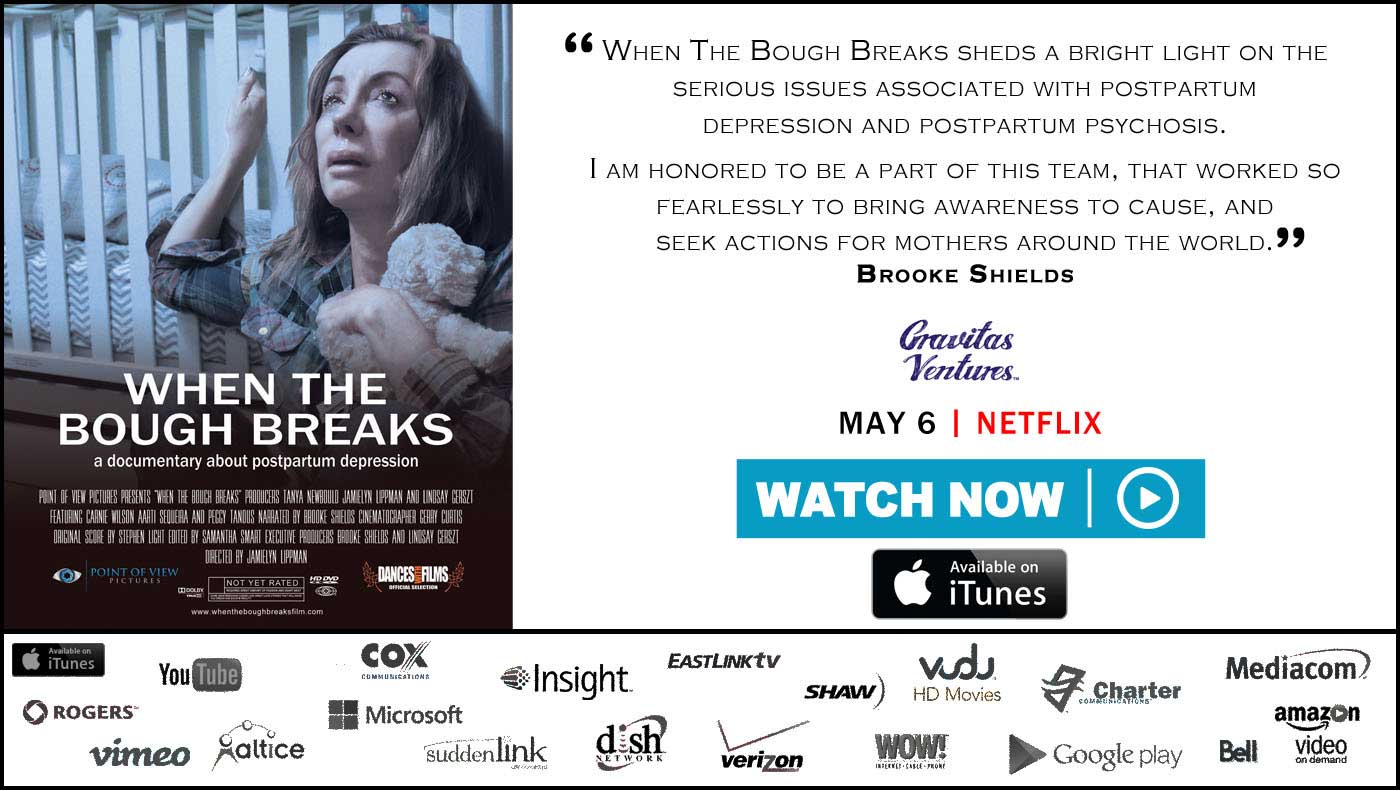 25 Nov When the Bough Breaks: A documentary about postpartum depression.

Posted at 13:48h in Uncategorized by support@orangeandbergamot.com 0 Comments
0 Likes

Tanya Newbould is an authority on overcoming adversity; she was adopted as a child, grew up with an alcoholic parent, and overcame Postpartum Depression to co-produce the critically acclaimed documentary When the Bough Breaks. Tanya’s mission in life is to help others and reassure them that they are not alone because of the experiences she has had, from trauma to success.

Postpartum depression is rarely discussed openly because, like other types of depression, it is still considered taboo. The documentary’s narrator and executive producer, Brook Shields, emphasizes that one in five mothers experiences postpartum depression. Having a child is supposed to be a time of great joy, but many new mothers experience overwhelming feelings of sadness, anxiety, and hopelessness instead.

The film When the Bough Breaks focuses primarily on the traumatic experiences of Lindsay Gerszt, a mother who suffered from PPDF for six years and ultimately overcame her illness. Singer Carnie Wilson, actress Tanya Newbould, famous chef Aarti Sequeria, and Peggy Tanous from The Real Housewives of Orange County all share their stories in the documentary.

There will be many more cases of infanticide and families will mourn the loss of mothers who committed suicide unless more is done to educate women and the general public about postpartum depression and postpartum psychosis.

When the Bough Breaks Review

We made this film to help those suffering from #Postpartumdepression ⁦@serenawilliams⁩ ⁦@mcuban⁩ it the film is Executive Produced and Narrated by ⁦@BrookeShields⁩ please help us spread the word. ⁦@JamielynLippman⁩ #ppd #depression #postpartum

Repost from @youvegotballz • Absolute Vision is

I’m humbled and honored to be a co-author of “

Such a wonderful Thanksgiving @marcusmarvels @troy

We use cookies on our website to give you the most relevant experience by remembering your preferences and repeat visits. By clicking “Accept All”, you consent to the use of ALL the cookies. However, you may visit "Cookie Settings" to provide a controlled consent.
Cookie SettingsAccept All
Manage consent

This website uses cookies to improve your experience while you navigate through the website. Out of these, the cookies that are categorized as necessary are stored on your browser as they are essential for the working of basic functionalities of the website. We also use third-party cookies that help us analyze and understand how you use this website. These cookies will be stored in your browser only with your consent. You also have the option to opt-out of these cookies. But opting out of some of these cookies may affect your browsing experience.
Necessary Always Enabled
Necessary cookies are absolutely essential for the website to function properly. These cookies ensure basic functionalities and security features of the website, anonymously.
Functional
Functional cookies help to perform certain functionalities like sharing the content of the website on social media platforms, collect feedbacks, and other third-party features.
Performance
Performance cookies are used to understand and analyze the key performance indexes of the website which helps in delivering a better user experience for the visitors.
Analytics
Analytical cookies are used to understand how visitors interact with the website. These cookies help provide information on metrics the number of visitors, bounce rate, traffic source, etc.
Advertisement
Advertisement cookies are used to provide visitors with relevant ads and marketing campaigns. These cookies track visitors across websites and collect information to provide customized ads.
Others
Other uncategorized cookies are those that are being analyzed and have not been classified into a category as yet.
SAVE & ACCEPT